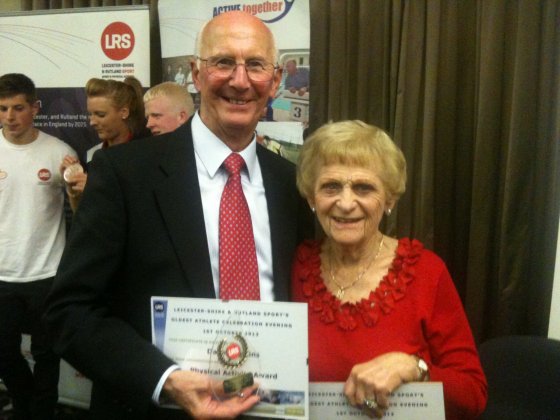 Oadby and Wigston residents, Dave Tomkins and Hetty King were in attendance at the Leicester-shire and Rutland Sport Oldest Athlete celebration on 1 October 2012.

Over 30 nominees from across the county were invited to the celebration at the Link Hotel in Loughborough, with 8 awards up for grabs.

Dave Tomkins, aged 75 from Oadby won the Physical Activity (participation) award and was overwhelmed by the award. Dave was referred into the Exercise Referral scheme at Parklands Leisure Centre in November 2011 following hip and knee surgery.

'I really cant believe it, a year ago I was walking on sticks, and now I go to the gym at Parklands, I can play bowls again and I dance. I still get pain but it's about managing it.'

Hetty King, 87, was runner up in the Lifetime Achievement award. 'I joined Parklands when it first opened in 1992 and I've just been going ever since. I really enjoy the classes there. Sometimes I go into the gym but it can get a little boring, but it's the classes which I most enjoy with other people.'

Both athletes were nominated by Exercise Referral and Heart Smart instructor Sammy Ashmore, who was also in attendance at the event. 'It's been a great evening and lovely to hear of the many achievements of so many older people. Dave and Hetty certainly deserve their awards and hope that they inspire others to do the same.'

Other awards went to a 71 year old tough guy competitor, who also competes in 24 hour marathons and was an Olympic torch bearer in Leicester, a 73 year old volleyball referee who assisted with the 2012 Olympic Games and the oldest athlete award went to 92 year old swimmer Nancy Kelly.

Our congratulations go out to all award winners and nominees at the event.