Forget the Football - the School Games Summer Championships is here! 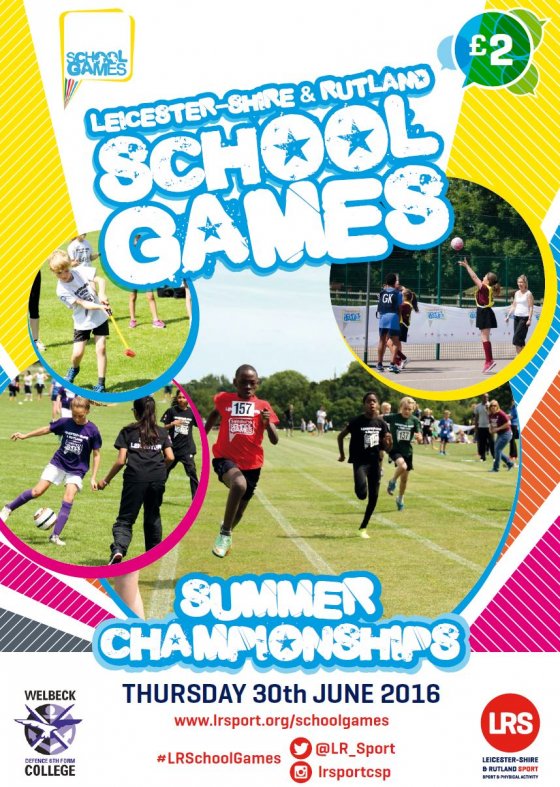 The Leicester-Shire & Rutland School Games Summer Championships is the grand showcase finale to the 2015/16 School Games Programme. With over 1,100 of our most talented young athletes and disabled athletes aged 8-11 years, from across Leicestershire, Leicester and Rutland.

With the Rio 2016 Olympics and Paralympics taking place this summer, and the 2016 National School Games Finals taking place at Loughborough University in September, the Summer Championships set to build the excitement and momentum.

The primary aged athletes, representing over 60 schools, in 129 teams, will be representing our 10 School Sport & Physical Activity Networks (SSPANs), in 13 competitions across 9 sports.

The action-packed event will see the athletes show off their sporting talent and go head-to-head against the other Partnerships, all of which will have qualified from Level 2 area finals, to participate in this Level 3 County Final Championships.

The Championships Opening Ceremony will be hosted by Gaynor Nash and will feature recent F35 Shot Put European Silver Medallist Sam Ruddock, a performance from a local Sambando band, providing the Championships with a carnival feel ahead of the Rio Olympics and a mass warm-up.

4 hours of competitive action will then follow indoors and outdoors across the impressive Welbeck Defence Sixth Form College site.

The Championships will culminate in a Closing Ceremony, in which Matt Hampson (former England U21 Rugby player) and Grace Garner (recent Essex Giro 2-Day winner)will be in attendance for a Question and Answer session and to support with the Presentation of Trophies to the winning teams and 'Spirit of the Games' winners.

In addition the Partnership that has won the most 'Spirit of the Games' awards over the year will receive the overall '2015/16 Spirit of the Games Champions' trophy, claimed proudly by North Charnwood last year.

Below is how the medal table currently stands – it is very close for both trophies so there is all to play for on the day!

The Leicester-Shire & Rutland School Games, now in its sixth year, is part of the national 'School Games Programme' that is a unique opportunity to motivate and inspire young people to take part in more competitive school sport. It is open to all young people aged 5-18 years, of all abilities and backgrounds from every school across Leicestershire, Leicester and Rutland.

The latest results and pictures from the Summer Championships will be updated throughout the day live on our Twitter @LR_Sport and Instagram @lrsportcsp accounts using the #LRSchoolGames.