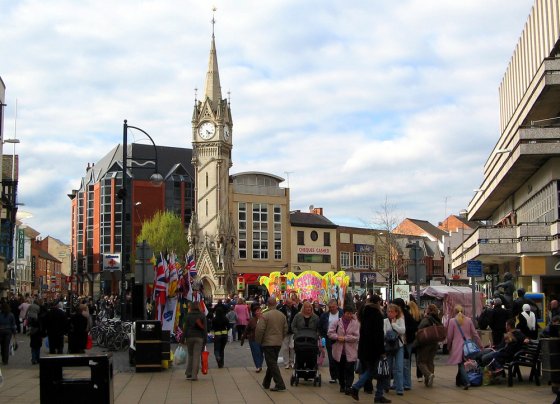 Leicester has ranked as the UK's Greatest Sporting City for 2016, according to research from ESPN and the University of Bath. The accolade for the city comes after leading UK sport site ESPN.co.uk collaborated with the University of Bath on the second annual research project to discover the best place in the country to be a sports fan.

Nottingham moves up to second in the regional rankings after coming fourth in 2015, thanks to an eight place jump from 20th to 12th in the national rankings. Birmingham ranks third in the Midlands, down from second last year, although it has moved up from 17th to 13th place overall. Northampton is fourth and one of the biggest risers in the UK, going from 33rd to 17th.

Derby is one of the biggest fallers in the whole list after it dropped 14 places to 22nd – its eighth position nationally last year made it the highest ranked city in the Midlands but it now sits fifth, however it did maintain the top score in the country for Value for Money. Coventry and Stoke-on-Trent remain sixth and seventh respectively in the regional rankings, but both climbed up the national rankings, with Coventry going from 43rd to 34th and Stoke from 46th to 35th.

This year, ESPN also divided the research into individual sports to reveal the best places to be a fan of football, cricket, rugby union and rugby league. On the back of Leicester City's historic title-winning season, Leicester received the accolade of the best city to be a football fan. Leeds ranked as the best city for both cricket and rugby league fans, while Cardiff is the top town for rugby union lovers.

There is a continued northern dominance in the top ten, with seven of the top-ranked cities located in the north of the UK, up from six last year. Despite Leicester's massive 17-place rise up the list, it is not the biggest climber, as Oxford jumped up 19 places from 40th to 21st. Meanwhile, the biggest faller was Bournemouth, which dropped 24 places from 22nd to 46th.

As part of the research, ESPN asked fans to rank 12 factors that help make up a great sporting city, in order to provide weightings for each city's results. This year, fans ranked Value for Money as the most important factor, as it received 19% of the vote. A city's Matchday Atmosphere was ranked by 17% of fans as the most important, while Club Success for a city's professional teams received 15% of fan votes.

Commenting on the research, Professor Thomas Curran, University of Bath, said: "It is not easy to earn the accolade of ESPN's Greatest Sporting City, so the city of Leicester deserves all the congratulations it receives. To rank highly, a city must perform well in a variety of key factors which rely on a combination of fan opinion and third party data. To score top marks in five factors is a great achievement."

Steven Saunders, Senior Editor of ESPN.co.uk, said: "Leicester topping the rankings as ESPN's Greatest Sporting City 2016 is another amazing achievement for the city, especially considering the traditional sporting powerhouses such as London and Manchester that it has beaten to the top spot."

Leicester's City Mayor Sir Peter Soulsby said: "Leicester City's success last season has given the whole city a huge boost, and that positivity is clearly reflected in this research. We're obviously enormously proud of our football club, but Leicester is also home to one of England's most successful rugby clubs, the country's oldest basketball club, an ambitious cricket club, and a very successful women's hockey club.

"I think it's fair to say that, when it comes to sport, Leicester – a city of just 330,000 people – enjoys punching above its weight. Being recognised as the best place in the country to be a fan is a huge accolade, so I am delighted that ESPN's research has confirmed Leicester as the UK's Greatest Sporting City."

Leicester City captain Wes Morgan said: "It's hard to explain exactly what impact last season had on this city but just by walking around the streets you can see there's blue in almost every shop window, which just goes to show the support the people of Leicester have given to us. To see 250,000 people turn out for our Premier League trophy parade was a moment I and every person there will never forget and I know the pride the people of Leicester showed at our title win extends across the city's rugby, cricket and basketball teams too.

"Here at the Football Club I know there are lads who regularly attend Tigers games and we often see players from the Foxes and Riders at King Power Stadium, which shows what a brilliant sporting city this is. I'm involved in a tattoo shop in the city centre and since we won the league I'd say around 70 per cent of the tattoos we do are LCFC-themed. That underlines just how much the people of Leicester love sport and their teams, so it's great to see the city recognised for that."

Leicester Tigers director of rugby Richard Cockerill said: "I'm delighted to see that Leicester has named been the UK's Greatest Sporting City. This has always been a sporting city, with great local support for all of our teams and sportspeople, and it is good to see that status earning recognition from a wider audience.

"Our neighbours at Leicester City have obviously enjoyed a memorable year and all of the city's sports have been extremely proud of each other's achievements in representing this part of the country in major competitions in the UK and further afield.
"At Tigers we have enjoyed consistent success over very many years backed by a very committed and loyal support. It is always our ambition to be at the forefront of our sport while also recognising and cheering the successes for our teams and sportspeople across the county."

"The recent successes of Leicester City FC, coupled with the significant progress made by Leicester Tigers and the Cricket Club, further illustrates the heritage and pedigree of sport in the city. The sporting family in Leicester has some of the most passionate and loyal collective fans in the country and this recognition is for them as much as the clubs themselves."

ESPN.co.uk delivers fans in the UK multi-sport news, coverage and video – from football, cricket, rugby, and Formula 1 to golf, boxing, tennis, the best of US sports and more. The site's London-based editorial team delivers coverage for UK fans, leveraging ESPN's global reach and sports news organization, featuring an unmatched collection of journalists covering every major sport around the world.