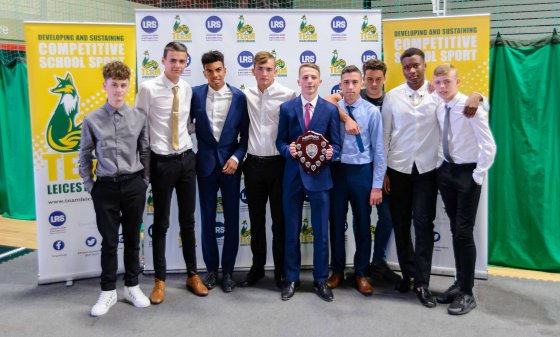 Team Leicestershire celebrated its second year with an end of season Awards Evening, celebrating the county's winning teams during 2016/17.

Held at the Leicester Arena on 4th July, home of BBL League Champions, Leicester Riders, more than 400 athletes, parents and teachers were in attendance to recognise the winners from this year.

The evening recognised and celebrated the 52 County winning teams from Table Tennis, Futsal, Badminton, Basketball, Rugby, Netball, Football, Hockey and Cricket. Alongside profiling the County Representative Sides of Girls Football, Table Tennis, Badminton and Hockey, who have represented their County as Team Leicestershire, with pride on a regional and national stage.

The audience also enjoyed a freestyle football demonstration from Steve Gray, who wowed the crowd with his array of skills before teaching two lucky youngsters the art of freestyle.

Regional and National success has followed some of the Team Leicestershire Champions including;

Geoff Maltby, Sports Development Manager at Leicester-Shire & Rutland Sport (LRS) said, "Now in our second year, Team Leicestershire continues to develop and grow into a high quality co-ordinated competition programme for our secondary age young people. It's great to see new schools both entering competitions and being successful in county finals. The spread of winning schools across Leicestershire, Leicester City and Rutland this year was fantastic! I would like to thank the commitment and support of all those staff that have ensured this has been a successful programme again this year and look forward to the start of the 2017/18 season!"

Team Leicestershire has developed a bespoke online 'School Fixtures' software, which can be accessed by all schools and where school staff can easily manage all fixtures and results throughout the academic year. The website can also be accessed by pupils and parents to view fixtures and results and the progression of their school teams to from local leagues to County Finals.

View the photographs from the Awards evening by visiting our Facebook page!