Olympic and Paralympic heroes encourage nation to get active at #teamparkrun 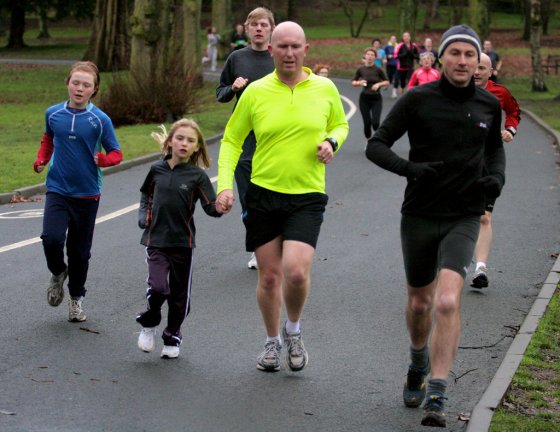 100 of UK Sport's National Lottery funded Olympic and Paralympic athletes teamed up with parkrun UK today to encourage the nation to get active with #teamparkrun.

To thank the public for their support, through The National Lottery, of sport at all levels and for being right behind them every step of the way, Olympic and Paralympic heroes were right behind participants of #teamparkrun, acting as tail walkers at parkruns across the country.

Following on from the UK's biggest ever sports participation event I Am Team GB, #teamparkrun saw 100 Olympic and Paralympic athletes involved in 5k parkrun events across the UK.

parkrun takes place every Saturday at 9am in England and Wales and 9.30am in Scotland and Northern Ireland. It offers a free and easy way to take your first steps into becoming more active.

London 2017 World Champion Adam Gemili said: ""Last Saturday I was becoming a World Champion in the Olympic Stadium. One week on I'm in hi-viz volunteering at a parkrun getting behind these local runners because it's a great chance to say thank you for their support. By playing The National Lottery the British public do so much to back sport, whether elite or grassroots, and today is a great chance to recognise that.

"The great thing about sport is, whether it's the Olympic Stadium or your local park, we've all got our own finish line that means something to us. Today I'm just happy to be stood on theirs cheering them on.

"Every journey that ends up at a World Championships or an Olympics starts somewhere like this. But, regardless of what level you get to or how fast you're going, simply making a choice to get out there and get active is one I don't think you'll ever regret.

You look at an event like today and, while it's about running and getting healthy, it's about so much more than that - it's about community and friendship as much as anything else."

"The National Lottery and its players have supported me and the team over the years. By playing they have helped fund our training, support staff and coaching as well as thousands of grassroots clubs, many of which we started our careers at.

"This is my third parkrun and it's been a great to be involved as tail walker. I have met some great people from my local community. What a fun way to spend a Saturday morning!"

London 2012 Olympic Long Jump Champion Greg Rutherford said: "The clever heads at UK Sport decided to bring together the Olympians and Paralympians to go to their local Parkrun to meet and greet with the people who have been supporting us for so long.

"For us it's a chance to come down, say thanks for getting involved and have some fun as well, which has been absolutely brilliant.

Rio 2016 Paralympic swimming champion Ellie Robinson said: "It was fantastic being part of #teamparkrun and to meet so many different people who were keen to get active.

"I really enjoyed being a tail walker and getting behind the public after they all got behind us. The National Lottery funding that they give us is so important. We wouldn't be in the position to give back to them, if they didn't help us.

"They've helped us so much, and this is a way we can help them back. It's so important to be able to say thank you because we are all so grateful. We wouldn't be doing what we do without the people that buy those tickets."

#teamparkrun participant Lorraine Lewis, 32, from Northampton said: "Today was an amazing experience. I wasn't actually going to turn up today but a change plans meant I could come down and I got to meet Ellie Robinson which was amazing!

"I have done about five parkruns before so I am just getting into it but this has been the best one yet! To meet Ellie has given me a real boost because she is such a legend. She has inspired me to keep going."