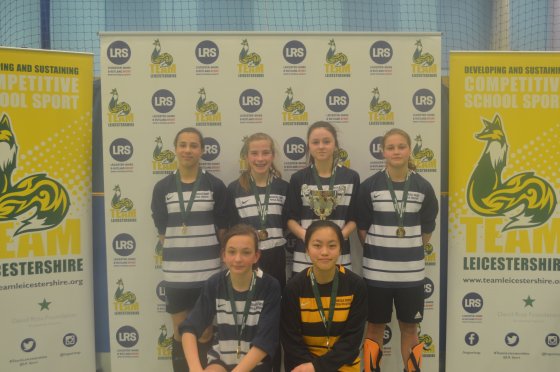 Highlights saw hosts in Group 'A', Crown Hills Community College struggling to make their mark as they played in a tough group with nothing much between Wigston Academy, Brockington College and Castle Rock.

Brookvale Groby learning Campus topped Group 'B' as they took on each side by storm. Rawlins produced some of the greatest moments during the group stages as the team played good combinations around oppositions with some great skill on the ball.

A night of high scoring matches proved all teams to be deadly in front of goal. One match witnessed a potential goal of the tournament, Rawlins rifling a long-ranged shot from deep in their own half into the top corner.

The two top teams from each group played each other in finals in the corresponding format:

It was Brookvale Groby Learning Campus who won the trophy in a tournament that was taken right to the wire. Wigston Academy should be proud by winning a second medal in a row. Brockington edged to claim 3rd place with another very close game played to the highest quality. A very enjoyable night for the neutrals!

Each of the results from the group stages and finals can be found on the Team Leicestershire website. A special thanks to Crown Hills Community College for once again being great hosts and assisting facilitate the event.

Two more futsal finals are on the way this week so keep your eyes peeled for more highlights and results:

The photographs from the Team Leicestershire Finals are available to view on our Facebook page. Make sure to keep up with all the action over the coming months through our Twitter - @LR_Sport, Instagram - @lr_sport_ and Snapchat - lr_sport using #TeamLeicestershire.