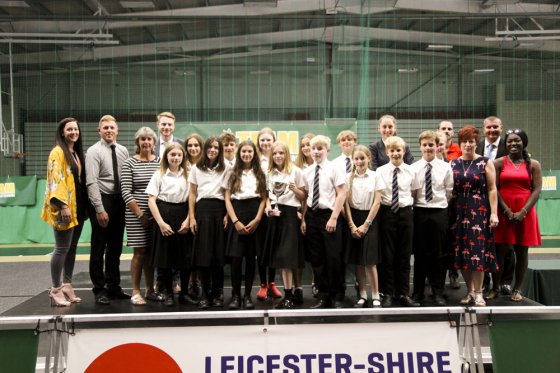 Over 450 athletes, representatives, proud parents and schools attended the evening which showcased and celebrated the achievements this year.

Some of the winning teams progressed beyond the county finals onto regional and national finals:

Special guests Siobhan Prior, Basketball Silver Commonwealth Medallist and Ned Eckersley, current player at Leicestershire County Cricket Club also made an appearance to congratulate the winners on the night.

During this year's programme, 8,440 individual pupils have taken part in Team Leicestershire fixtures, representing 1,093 school teams. As well as recognising all the County Champions, two inaugural awards were presented.

The second, and very special new award was the 'Ernie White Award for Commitment to School Sport'. Stuart Linderman, Chair of the Team Leicestershire Board highlighted the prestige of this award, in memory of Leicestershire County Council's former Councillor Ernie White, who sadly passed away in January. "Ernie was a huge supporter of Leicester-Shire & Rutland Sport and school sport across Leicestershire, supporting local programmes including the 'Competition Manager Programme', 'Youth Games', 'GO GOLD Funding Programme', 'School Games' and most recently, the evolution of Team Leicestershire, therefore it's a fitting tribute to such a great man and advocate of school sport".

Ernie's family were in attendance and presented the inaugural award in his memory. The award celebrates the school who have engaged the highest percentage of pupils from their school in Team Leicestershire competitions throughout the year. Uppingham Community College were this year's winner, engaging 37% of their pupils in Team Leicestershire competitions throughout the year. Head Teacher Ben Solly stated, "The school has worked so hard this year to engage as many pupils as possible, it's a great honour to be the recipients of this award and a testament to school staff and pupils".

Geoff Maltby, Sports Development Manager at Leicester-Shire & Rutland Sport said, "Now in our third year, Team Leicestershire continues to develop and grow into a high quality co-ordinated competition programme for our secondary age young people. It's great to see new schools both entering competitions and being successful in county finals. The spread of winning schools across Leicestershire, Leicester City and Rutland this year was fantastic! I would like to thank the commitment and support of all those staff that have ensured this has been a successful programme again this year and look forward to the start of the 2018/19 season!"

Photographs from the evening are now available to view on our Facebook page.