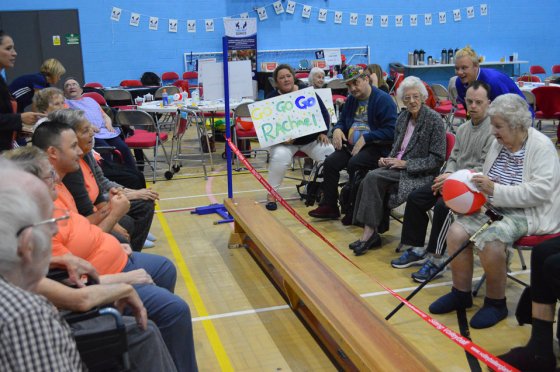 The Twilight Games Championships took place at Parklands Leisure Centre in Oadby on Tuesday 11th September, as 8 Care Homes and 48 residents from across the County competed to claim the first ever title, following the success of the Twilight Games Programme.

The opening ceremony saw residents eager to get the games started, as they came fully equipped with team names, flags, banners and Hadrian House's very own giant teddy bear mascot!

On the day of the Championships, 3 competitions took place for teams to compete against each other in a round-robin styled fixture list. The activity schedule included the likes of: boccia, seated volleyball and audio basketball. A fun activity zone involving skittles and beanbag target throw was also setup for teams who were rested between the games, ensuring residents had the choice to either encourage other teams on or get more practice in, ready for the next competition.

Although the Championships added a competitive nature to the day, the overall Twilight Games aims to increase mobility, mental health and wellbeing and increased social activity, exercised by residents in their own setting.

The Chairman of the Leicestershire County Council, Mr Ozzy O'Shea, featured in the second half of the day to greet and encourage the residents on this special occasion. The Chairman also presented the awards during the presentation ceremony. His words touched on the success of the event: "You're not just doing exercise here like you have been doing before, you're meeting people, you're socialising and having a good time and that's what it's about!"

The day concluded with each care home awarded for their huge efforts in participation with medals and a certificate based on their final position:

Leicester-Shire & Rutland Sports Development Officer, Kate Scott, who organised the event highlighted on the event "The Championships has been a great success following a true partnership effort with LRS and care homes working together to create a programme of activity for our older generation. To see all the athletes taking part in such an enthusiastic and competitive manner just goes to show that you are never too old to take part in sport".

Tammy Tomlin, Care Home Co-ordinator from Cooper House added: "We from Cooper house had an amazing day to for the Twilight Games Championships. We really do hope we will be doing it again it was brilliant".

To view the photographs from the event, visit our Facebook page.