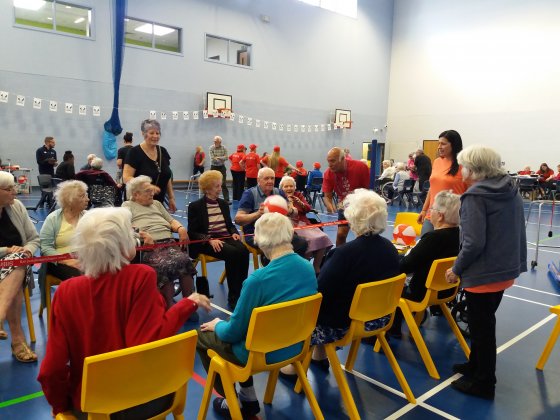 Following the continued success of the Twilight Games programme, the second Twilight Games Championships took place at Ellesmere College in Leicester, on Saturday 4th May when residents of 7 care homes from across the County and City competed to claim the title. The Care Homes that took part include:

The opening ceremony saw residents eager to get the games started, as they came fully equipped with team names, flags and banners.

On the day of the Championships, 3 competitions took place for teams to compete against each other in a round-robin styled fixture list. The activity schedule included boccia, seated volleyball and audio basketball. A fun activity zone involving skittles and beanbag target throw was also setup for teams who were rested between the games, ensuring residents had the choice to either encourage other teams on or get more practice in, ready for the next competition.

The Championships add a competitive nature to the programme, however the general aims of the Twilight Games is to increase mobility, mental health and wellbeing and increased social activity, exercised by residents in their own setting.

The event was sponsored by Central England Co-operative Limited and the Co-operative Funeral Care. Karen Bevan, the Member and Community Relations Manager, said "It is fantastic to be able to support this great event. At Central England Co-op, we are proud to be a responsible retailer that looks to work with our older residents and their carers and families to highlight the importance of maintaining a healthy and active lifestyle. The Twilight Games Championships is a great way to get our older generation participating in activity whilst enjoying a social and fun day".

The day concluded with each care home awarded for their huge efforts in participation with medals and a certificate. The winners Thurn Court Care Home 'Alpha Team' received the trophy from Karen Bevan.

Leicester-Shire & Rutland Sport have been working in partnership with Mayfield Lifeskills Centre to deliver the programme and host the event. Sport Development Officer, Kate Scott, said "The Championships has been a great success following a true partnership effort with LRS, Mayfields Lifeskills Centre and care homes working together to create a programme of activity for our older generation. To see all the athletes taking part in such an enthusiastic and competitive manner just goes to show that you are never too old to take part in sport".

One of the competing teams, Kirby House said "Our team gained positivity, competition and feeling of worth from being involved and they loved the team spirt and atmosphere of the day. Team Kirby will be ready for next year and want to come first. Our medals and certificates are displayed in the foyer – we are very proud".