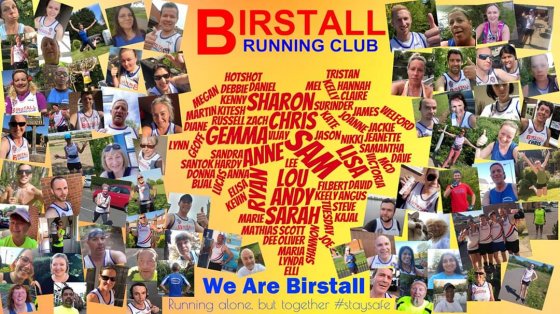 Members of Birstall Running Club are used to doing 3 training runs a week and races at weekends but during isolation have been doing solo runs. All the usual running races and events have all been cancelled, so Club Coach, Daniel Burns, devised a virtual relay race challenge just for our members on Saturday 25th April.

75 runners from the club took part. The plan was for each runner to run solo for 30 minutes from their own homes and they would submit the distance they covered with a photo of themselves in their club kit. There was three teams of 25 runners and each runner had a starting time slot from 8am to 8pm. The teams were named Team Welford, Team Hotshot and Team Filbert.

As the day warmed up, so did the competition with organiser, Daniel Burns, keeping a live tally of results. By 12pm Team Welford were in the lead with a margin of 0.33miles. " it was looking incredibly close at this point" and I knew any team had a chance of winning.

Throughout the day there was plenty of discussion, encouragement and photos on the club's Facebook page - with members children drawing signs to boost their mum's team. The Facebook page had 865 comments and 77 pictures on it by the end.

At 8pm the last runners for each team set-off and just after 8.30pm these three runners submitted their distances and the overall distance calculated.

Martin Boyce (first runner of the day for Team Welford) had been downloading the pictures that had been uploaded and by the end of the race had created a fantastic photo montage of all the participants with the tag line Birstall running club - Running alone but together.

"I was blown away by the participation and as always our team spirit has been absolutely amazing. Although we were out running alone it felt great knowing that other club members were out too.

To have people comment saying its been their highlight during lockdown and that they've had so much fun means the world to me, and we all need that at this point." Asked if he would do it again "in a heartbeat".