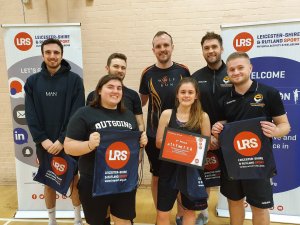 It was an action-packed evening for the first workplace competition of 2020! Read More » 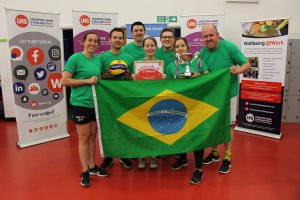 Over 160 participants, from local businesses and workplaces from Leicestershire, Leicester and Rutland, met to compete for the title of Workplace World Cup Champions on Thursday 6th June at Brockington College in Enderby.

As the evening sun shone teams showcased their skill and sportsmanship in a variety of sports and activities including handball, volleyball, rounders and table tennis. The atmosphere was full of energy as the teams took to the pitches and got stuck into the activities on offer. Shouts of support could be heard from across the site as participants cheered on teammates and opponents alike.

Prior the Workplace World Cup teams were assigned a country participating in one of the four World Cups taking place this year (Rugby Union, Cricket, Women's Football and Netball), and some teams chose to add to the atmosphere and represent the country further by competing in a variety fancy dress costumes.

In between activities teams took the opportunity to visit the Health and wellbeing Zone where teams could take part in interactive activities designed to support a healthy lifestyle, particularly at work. Heartwize delivered CPR and defibrillator demonstrations with a race to see who performed CPR the most accurately. The Choose How You Move team ran a desk-based cycle activity and offering advice on supporting Active Travel initiatives in the workplace. Team members had the option to pedal their way to a fresh fruit smoothie on the Smoothie bike.